Jakarta, originally named Sunda Kelapa during the Sunda Kingdom era. After the defeat of Sunda Kingdom to Sultanate of Demak,  Fatahillah, changed the name of the area to become Jayakarta. After the Dutch succesfully defeated Banten Prince Jayawikarta and his British ally troops, Jayakarta then changed to become Batavia in 1619. Batavia is the name of the city and become the de facto capital of Dutch East Indies. Batavia become the name of the city since begininning of 1619 until the arrival of Japanese in Indonesia during the World War II when the Indonesian independence movement leaders changed its name to become Jakarta.

Jakarta officially known as the Special Capital Territory of Jakarta is the capital and largest city of Indonesia. Located on the northwest coast of Java, Jakarta is the country’s economic, cultural and political centre. With a population of 10,187,595 as of November 2011, Jakarta is the most populous city in Indonesia and in Southeast Asia, and is the twelveth-largest city in the world. Jakarta is listed as a global city in the 2008 Globalization and World Cities Study Group and Network (GaWC) research and has an area of 661 square kilometres (255 sq mi).

We designed 4 city tour route options to help you discover Jakarta, its history, heritage and present. The tour itinerary of each options is follows: 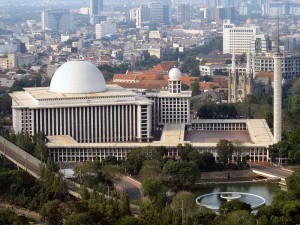 Among other civilisations that that made up the history of Jakarta, Islam heritage is one of the strongest and lasting influence until today. Routes for this tour are: Old Sunda Kelapa port,  Al Azhar Mosque, Istiqlal Mosque, Fatahillah Museum; National Museum, Mosque of Gold Dome Depok & Taman Mini Indonesia Indah;

Duration of the tour 9 hours; depart 9 am and finished 6 pm.

We also offer fully organized tour packages for you and your loved ones to enjoy Jakarta and the outer city of Bandung.